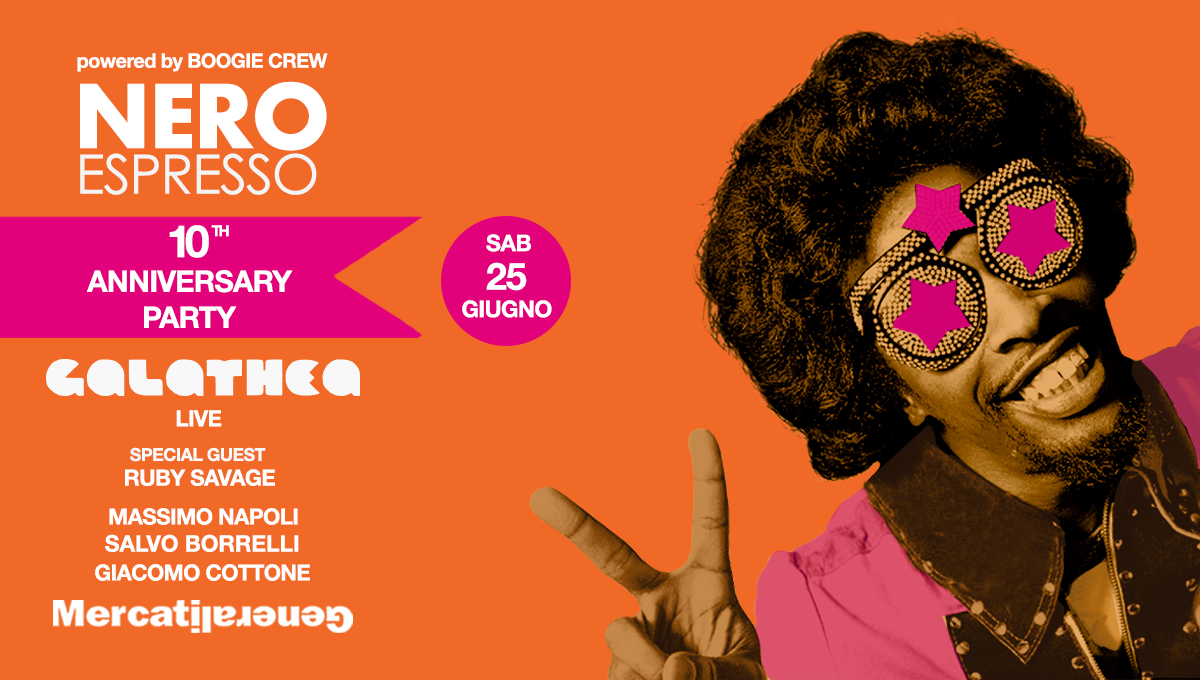 SABATO 25 GIUGNO
NERO ESPRESSO 10th Anniversary Party • Mercati Generali
powered by Boogie Crew
Galathea live + Ruby Savage special guest
The real only fuckin’ black music party!
GALATHEA live
Massimo Napoli (Drum Machine)
Salvo Dub (Bass)
Dario Aiello (Guitar)
Giulia La Rosa (Vocal)
Daniele Salomone (Keyboards)
Gionata Colaprisca (Percussions)
Marco Di Dio (Drums)
Djset
RUBY SAVAGE (London) special guest
Salvo Borrelli
Giacomo Cottone
Massimo Napoli
Prevendite online qui: https://link.dice.fm/v15ff2ab29fc
Galathea è il nuovo progetto creato dal dj e musicista Massimo Napoli. L’album omonimo uscito sulla etichetta discografica Space Echo di Milano rappresenta un viaggio onirico che tocca la cultura mediterranea, l’Africa, le melodie cinematografiche, il jazz e il funk, il tutto contaminato da suoni spirituali e ambientazioni elettroniche.
Bio Ruby Savage
On the horizon with a bag full of warm eclectic grooves as well as straight up pumping beats. Low lights, solid subs and peoples from all walks that come to dance, have fun and shake off any ’n’ all bad juju. That’s the kind of dance Ruby lives for.
Since moving from her hometown Amsterdam to London in 2007, Ruby Kwasiba Savage has worked behind the counter at Honest Jon’s Records and managed record label Sounds Signature, where she also created the Wildheart Recordings sister label. Much of Brownswood Recording’s recent success has been down to her stewardship as label manager from 2016-2018, while personal exploits have taken her to the dance floor with her In Flames post-punk disco party and a monthly show on NTS. Alongside bopping through the booths of London’s most well respected clubs including Oval Space, Phonox, 5 Miles, Pickle Factory, Giant Steps and The Village Underground. Born in Amsterdam to English and Surinamese parents, Ruby was raised on a mantra of “freedom, healing, peace and power in music”. From her mother she inherited an appreciation for the eclectic – from Fela to Miles to Chopin and The Supremes – while her spiritual connection to music, rhythm and dance came through her Surinamese father, a singer, percussionist and Obiaman centred around Winti culture. Ruby’s personal journey in music started during childhood with an instant love for Soul and Reggae. As a teen, Hip Hop was central and its samples lead her to the depths of Funk, Boogie, Dub and House music. Always searching for new scenes, moving to London introduced her to the musical freedom of church-like dances and pirate radio. Taking note from the incredible DJs that passed through London’s underground club Plastic People, where she felt most at home, her personal style and DJing philosophy developed in the background. For Ruby, harmony lays the base for good vibrations, an addictive, infectious and pivotal ingredient to build a great night. However when it’s time to drop a little spice to turn it up she won’t be shy to add some fire to the fun. That’s Ruby!
Dove: